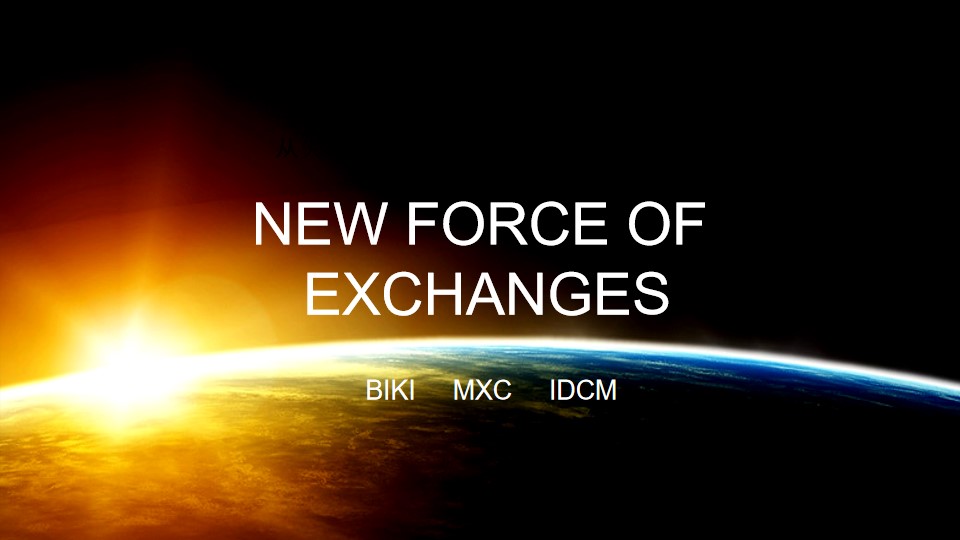 HOW DID THE NEW FORCE OF EXCHANGE IN 2019 RISE?

Introduction: BOH has been leading the market for 2 years, but the rise of BiKi, MXC and other exchanges has also brought some new possibilities for the industry. What is the secret of their rise?

Totally unexpectedly, only as a small bull market, some new leading exchanges such as BiKi, MXC, IDCM have risen rapidly already. The single marketing pattern innovation like Fcoin’s could no longer satisfy them. Instead, they focus more on building multi-oriented differentiation advantage and are bold to break the traditional rule. The structure of industry seems to have loosened already.

The rise of an exchange must have its necessary factors. From the earliest MT.Gox to subsequent BTCC, OKEx, Huobi, Binance and BitMEX etc, the achievement of a leading status has to result from their own distinctive strategy, such as the strong community marketing ability and the international strategy (Binance), the contract transaction between OKEx and BitMEX, the ecological advantage of Huobi…… Hence, what did BiKi, MXC do to collapse the seemingly unbreakable situation? What is the secret of their rise?

BiKi is a dark horse which rises in 2019. In this February, there were just around thousands of daily active users and less than 100,000 registered users on BiKi. But only within 3 months, the number of registered users immensely increased to 1.2 million; daily active users over 100,000; daily transaction users more than 20,000; daily transaction volume 20 million to 100 million USDT. The monthly service fees in May outnumbered 10 million RMB.

According to BiKi’s strategy, making the above achievements       within only three months, apart from celebrity endorsement and the high expense on promotion, the following methods are also worth learning.

BiKi’s strategy is mainly to list many projects and build many groups. According to Feixiaohao, there are 95 types of coins right on BiKi, whose number is near to that of head exchange. BiKi’s weekly report shows that, in this April and May, it listed about 10 new projects on line nearly every week. For building groups, BiKi could be crazy. Within one year, BiKi got 3 to 5 projects of million-level user groups; over 10 projects of 10K-level user groups; additionally more than 5,500 QQ groups and 8,200 WeChat groups of different scales. Through the above actions, BiKi rapidly completed the first accumulation of original users.

By referencing to the community E-commerce pattern, BiKi set up  community partner system: Once a partner can lock over 30,000 platform coins, s/he can become a partner and permanently receive the returns from the service charges of all types of coins at a certain rate by inviting new users. In addition, they would have some interests like locked position interests, locked position interests of the secondary invitation, the air drop of new coins and the lifelong binding of invitation relationship etc.

By using multi-layer invitation, BiKi got the returns of profits as well as more users’ attention; high autonomy and the lifelong binding of invitation relationship prompted the users’ desire to repost and spread; the constantly rising platform coins in the secondary market made users buy and lock them in position to become community partners; these partners would relay the exchange to introduce the flow, maintain the activity of community and guide the consensus.

In exchange industry, it is almost a custom that exchange only lists their own platform coins and lists after communicating with project side. BiKi lists nearly 10 mainstream exchanges’ platform coins such as HT, OKB, BNB and LEO etc. It also early listed some types of coins with higher market influence such as CELR and DOT etc. At the same time, it listed more than ten types of coins with million-level communities like VDS, ATT and MGC etc, also cooperating with many investment organizations to cover the first launch of head quarter in time. The superior capitals left from those platform coins and head public blockchain coins can be normally found on BiKi, which meets the demand of users, making it greatly convenient to invest various types of coins on one platform.

MXC was set online on the 7th of April in 2018. Within less than one year, MXC has stood out from thousands of exchanges and successfully become one of second-class exchanges. According to the official announcement of MXC, by 8th May 2019, the number of registered users on MXC had been over 1 million. The transaction pairs outnumbered 200 on MXC. Currently, the daily transaction volume has been over 500 million RMB and the daily active users have outnumbered 50,000.

The first flow bonus of MXC was from “Fetch.Ai” project which should’ve been first launched on Binance. Before Binance listed FET transaction pairs, MXC had first announced the matters of subscription on their homepage and listed FET. Subsequently, MXC continued to apply the same pattern, continually listing some tokens like NEW, RIF, BSV, BRC, BLOC and MGC etc. By ruffing and scrambling, within a short period of time, MXC rapidly got a large amount of attention and flow.

MXC did what most exchanges wanted but didn’t dare to do – listing the resonance coin VDS, and making it have a wealth legend of skyrocketing fiftyfold. This action of MXC has also triggered the resonance trend in the industry. After that, MXC also listed some other resonance coins like LDS, HDS and FDS etc. Although they are just some radically fluctuating and fake coins, because of a wealth-making effect, MXC exchange still attracted loads of users to accumulate a fresh batch of users and flow.

Unlike BiKi and MXC exchanges’ getting flow by projects and groups, the rise of IDCM exchange mainly relies on alliance partners from B-side. IDCM was established in October 2017 and said to be the first platform to achieve exchanges alliance globally. In November 2017, it set up the first alliance branch in Vietnam and subsequently added various branches in many areas such as Dubai, South Korea, Japan, Estonia, Taipei, Hongkong, Macau, Singapore, the Philippine’s, South Africa and Canada etc.

According to Coinmarketcap, the current IDCM exchange has gotten 593 million US dollars of 24-hour transaction volume and ranks 16th in the global exchange. To review, the rise of IDCM mainly depends on the following approaches:

Compared to similar exchanges like Binance, Huobi and OKEx etc, until today, IDCM is the only one which still insists in the market. In contrast to the single-point strategy used by BiKi and MXC, as a super point in alliance exchanges, IDCM shares flow and depth with the headquarter. Until now, the number of users on IDCM and its alliance members has been over one million.

At the same time, IDCM also listed the exchange alliance system which enables members to list coins and build exchanges within five days. This action has also enlarged its alliance ability.

In more than one year, IDCM has iterated more than 30 versions of products and applications, including web side, APP and H5. It also set up a team to provide 24-hour Chinese-English customer services to ensure the speed of topping up and withdrawing coins and the response. For security service, IDCM recruited a famous Singapore security service company HORANGI which exclusively provides security services for the apparatus of government to ensure users’ transaction safety.

In addition, IDCM exchange also pays much attention to increasing the coin flow. The daily transaction volume of well-known coins could reach millions of US dollars, which ensures that users could buy or sell tokens at the best prices. Better product experience helps the retention of users a lot.

On the same day last year, we thought that Fcoin would have been a main role to change the market and placed many expectations in it, but it failed afterwards. For this, when we all thought BOH could have stood out, some new fresh blood like BiKi, MXC and IDCM etc brought new changes to the market.

The change of an industry always starts from some tiny things and happens when most people pay little attention. A constantly unchangeable industrial structure is too mundane. Only the scene of a black horse’s making a come back can excite people. Hopefully, there will be more exchanges which can bring us more surprises.